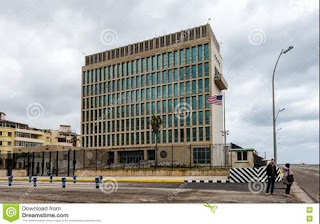 Scores of US embassy workers and CIA agents abroad have been mysteriously (invisibly) "attacked" since 2016 and have not recovered; some have retired early or are on disability for their illness.  They have what has been called "Havana Syndrome", which was first reported by US embassy workers in Havana in 2016, with symptoms of dizziness, fatigue, headaches, and loss of hearing, memory and balance, and then later in China and other countries)  After investigation, the conclusion by the National Academies of Sciences, Engineering, and Medicine, which included a committee of 19 experts in medicine and other fields, is that the "most plausible mechanism" for the attacks is “directed, pulsed radiofrequency energy”, a type of radiation that includes microwaves and wireless communications.  This is covered in an article by the NY Times that was just published December 5 https://www.nytimes.com/2020/12/05/business/economy/havana-syndrome-microwave-attack.html  (Please note there is a mistake in the NY Times article, where it said that cell phone radiation is not pulsed microwave energy, which is not true.  All wireless communications, which includes cell phones and Wi-Fi, are "pulsed".)
Previous news reports of attacks in China and Cuba:

The same thing happened over 50 years ago.  During the Cold War, the U.S. Embassy in Moscow had been bombarded by microwave radiation from the 1950s to the 1970s.  http://people.com/archive/the-microwave-menace-is-zapping-us-all-warns-writer-paul-brodeur-vol-9-no-4/   A study was done on the hundreds of exposed US embassy employees in Moscow by Lilienfeld et al, 1978 https://ntrl.ntis.gov/NTRL/dashboard/searchResults/titleDetail/PB288163.xhtml , which found that they had statistically significant higher rates of protozoal intestinal disease, psoriasis, skin conditions (cysts, dermatitis, eczema), eye problems, depression, irritability, difficulty concentration, memory loss, anemia, and ulcers compared to an unexposed US embassy group.

(By the way, this limit is increasing 4-fold, to 4000 uW/cm2, with no time limit, to accommodate higher radiation exposures from 5G devices and infrastructure, which was proposed in December 2019 - see paragraphs 127-8 of https://docs.fcc.gov/public/attachments/FCC-19-126A1.pdf )
The National Academy of Sciences Report, commissioned by the US State Dept, just published December 6, 2020 can be found here https://www.nap.edu/catalog/25889/an-assessment-of-illness-in-us-government-employees-and-their-families-at-overseas-embassies

p.  2 of the report acknowledges that the symptoms that the US diplomats and CIA agents experienced - dizziness, headache, fatigue, nausea, anxiety, cognitives deficit, and memory loss- are consistent with symptoms from pulsed RF exposure
p. 11 reports that these symptoms came on suddenly with the attacks, and then became chronicL

Previously, JAMA published a study on the diplomats in March 2018.  https://jamanetwork.com/journals/jama/article-abstract/2673168  , who experienced the following symptoms: