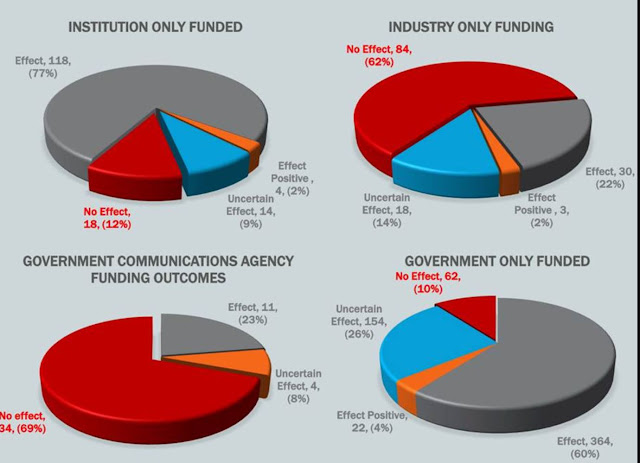 - agosto 19, 2017
qui dal sito EMFields  15 th August 2017                 5G Update There is currently a lot of concern being expressed on websites and emails about millimetre-waves (mm-waves) and 5G. It is very important to realise that these are not the same thing. 5G is a new, more technically advanced, version of the long-term-evolution (LTE) wireless communications system that effectively started with 3G. Over time it will use a variety of different carrier frequencies and modulations to transmit information. Some of these carrier frequencies will pass through buildings much more easily than others. All will be absorbed by living beings. The rollout of 5G will be done over a number of years. Suitable 5G carrier frequencies have different properties with some carrying data further being better at passing through walls and other obstacles, while others (mm-waves) can only be used over short direct distances but can carry vast amounts of information quickly (e.g. for downloading HD
Posta un commento
Continua a leggere

- agosto 09, 2017
Riporto un articolo del Prof  Joel M. Moskowitz, Ph.D.   che fa una sintesi dei punti essenziali della problematica del 5G per gli aspetti tecnico e sanitario. Monday, August 7, 2017 5G Wireless Technology: Millimeter Wave Health Effects The emergence of  5G , fifth-generation telecommunications networks, has been in the news lately because the wireless industry has been pushing controversial legislation at the state level to expedite the deployment of this technology. The legislation would block the rights of local governments and their citizens to control the installation of cellular antennas in the public “right-of-way.” Cell antennas may be installed on public utility poles every 10-12 houses in urban areas.  According to the industry, as many as 50,000 new cell sites will be required in California alone.  Although many  major cities and newspapers have opposed this legislation , the potential health risks from the proliferation of new cellular antenna sites ha
Posta un commento
Continua a leggere