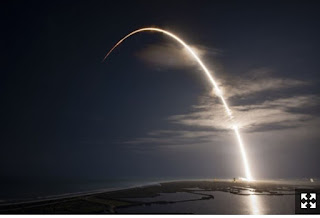 SpaceX reveals stunning image of Falcon 9 launching JCSAT-18/Kacific1 to geostationary transfer orbit. The Falcon 9 will be used in 2020 for launching Starlink satellites into lower orbit.  ( SpaceX via Twitter )

The Santa Fe Alliance for Public Health and Safety filed a lawsuit against the City of Santa Fe in federal court on January 11. The Alliance includes doctors, health care practitioners, psychotherapists, artists, teachers, a Health Department official, a city planner, a world class athlete and others who have lost jobs and homes to cell towers, or who have patients who have lost jobs and homes to cell towers. We are asking the court to declare Santa Fe's 5G ordinance unconstitutional, and to rule that neither the State of New Mexico nor the U.S. government may prohibit a city from protecting its citizens. As far as I know, this is the only litigation of its kind in the United States at the present time.

Our litigation is assuming greater importance by the day, because the assaults on our planet are rapidly escalating, and we haven't much time to stop them.

One week ago, Elon Musk announced an audacious plan to launch 12,000 low-orbit satellites "to beam an ultrafast, lag-free Internet connection" to every square inch of the earth. They will contain PHASED ARRAY ANTENNAS and will operate in the MILLIMETER WAVE SPECTRUM. In other words, 5G FROM SPACE. The first two test satellites were launched on a Falcon 9 rocket yesterday. News reports say "The initial satellites in the network are expected to come online next year."

To give you an idea of just how radical of an assault this will be, as of September 2017 there were a grand total of 1,738 operating satellites in orbit. About 930 of them were in low orbit (less than 1,000 miles above the earth). None of them were lower than 400 miles in altitude. Only 208 low orbit satellites were used for communication. Only 125 (Iridium and Globalstar) were for cell phone service. None of them provided high speed data. None of them were phased arrays.

The earth has never experienced anything like this. Even if Musk's Falcon Heavy rocket could launch 100 of these satellites at a time, which is likely, that still means 120 rocket launches. If he wants to get them all up there in a year's time, that's one launch every three days. And there are at least ten other companies that want to launch thousands of satellites each to do the same thing. OneWeb plans to launch the first ten of its planned 2,400 satellites in May.

The earth's protective ozone layer is still being depleted, scientists have just discovered, even though everyone thought the problem was solved by the Montreal Protocol. With so many rockets blasting holes in the atmosphere these days, that could be the reason. But nobody is talking about it.

The most current satellite database, kept by the Union of Concerned Scientists, is here: https://s3.amazonaws.com/ucs-documents/nuclear-weapons/sat-database/9-1-17-update/UCS_Satellite_Database_9-1-2017.xlsx

Musk's scheme alone could cause a catastrophic ozone loss, and it could also destroy all life on the planet. Musk's project is called Starlink.

GUARDS (Global Union Against Radiation Deployment from Space (http://stopglobalwifi.org) will have a teleconference this Sunday to discuss what to do. We need people with ideas, connections, and skills. Contact me if you want to help.

a book publicist
a webmaster
a fundraiser (paid on commission)

If you can help with any of the above, or know people with excellent skills in those areas that I can hire, also contact me.


The danger is greater and closer at hand than we thought. There will be not just hundreds, but thousands of satellites. Billions of dollars have already been invested. And the sheer numbers of planned rocket launches threaten to contribute to global warming and ozone depletion.
GUARDS
The (so far) eight companies seeking to rain high-speed Internet on
every square inch of the world before 2020 are:

The name of the game is competition. The stakes are high, and there is plenty of money to be made. Four and one half billion human beings are not yet in on social media. We may well face several large fleets of satellites providing high speed wireless Internet to penguins.
Virgin Galactic and Qualcom have invested in OneWeb's project. Honeywell International has already signed a memorandum of understanding to become OneWeb's first large customer. It plans to provide WiFi on business, commercial, and military aircraft throughout the world. At right is a press image from OneWeb's website.
Google is pouring money into every potential method of providing global wireless Internet. In addition to Project Loon, which would provide Wi-Fi from balloons,  Google bought Titan Aerospace, which makes high-altitude drones, in April 2014. Google is also investing heavily in Elon Musk's SpaceX project. Google and Fidelity Investments together have sunk one billion dollars in Musk's scheme to Wi-Fi the Earth and Mars.Yes,Mars. South African born billionaire  Musk hopes to plant a colony on the red planet within ten years, and intends to provide high speed Internet to both planets.
Samsung officially joined the fray last week, providing more details than any of its
competitors. The just-published article titled ”Mobile lnternet from the Heavens" by Sarnsung  engineer Farooq Khan reveals a plan to put 4,600 satellites into orbit at an altitude of 1,500 kilometers (930 miles), and transmitting at a frequency of 56 GHz. The antenna details are frightening. Each satellite will have phased array antennas with 1,024 elements, an actual power of5l2 watts, and an effective radiated power of one hundred million watts.
Post Office Box 62l6  • Santa Fe, NM 87502  •  (5O5) 47l-Ol29
info@cellphonetaskforce.org
Pubblicato da GiorgioCinciripini a 13:47 Nessun commento: