Updates from NTP, Japan, Korea & WHO

An international briefing on RF health research, known as GLORE 2020, was held online, November 9-12, featuring updates on the second phase of the U.S. National Toxicology Program (NTP) project and the Japanese-Korean partial repeat. The WHO presented a status report on ten ongoing systematic reviews of RF health effects.

Government and industry representatives from Australia, Canada, France, Japan, Korea, New Zealand and the U.S. participated, as did an assortment of academics.

The public and the press were not invited.

Everything about GLORE 2020 is being kept secret. “The groups organizing this meeting will not make the agenda, attendees list nor the presentations publically available,” ISED’s Josette Gallant told me by e-mail last week. (She did send her “warmest regards.”) GLORE 2020 was a “virtual” meeting held on the Microsoft Teams platform.

The press offices of both the NTP and Health Canada also declined to release any information. Jesse Saffron, an attorney with the NTP’s Office of Communications and Public Liaison, would only say that the meeting was closed. He suggested that I try under the Freedom of Information Act. (My last NTP FOIA request dragged on for more than two years.)

Microwave News has obtained a copy of the agenda (available here) as well as some of the presentations (see below). 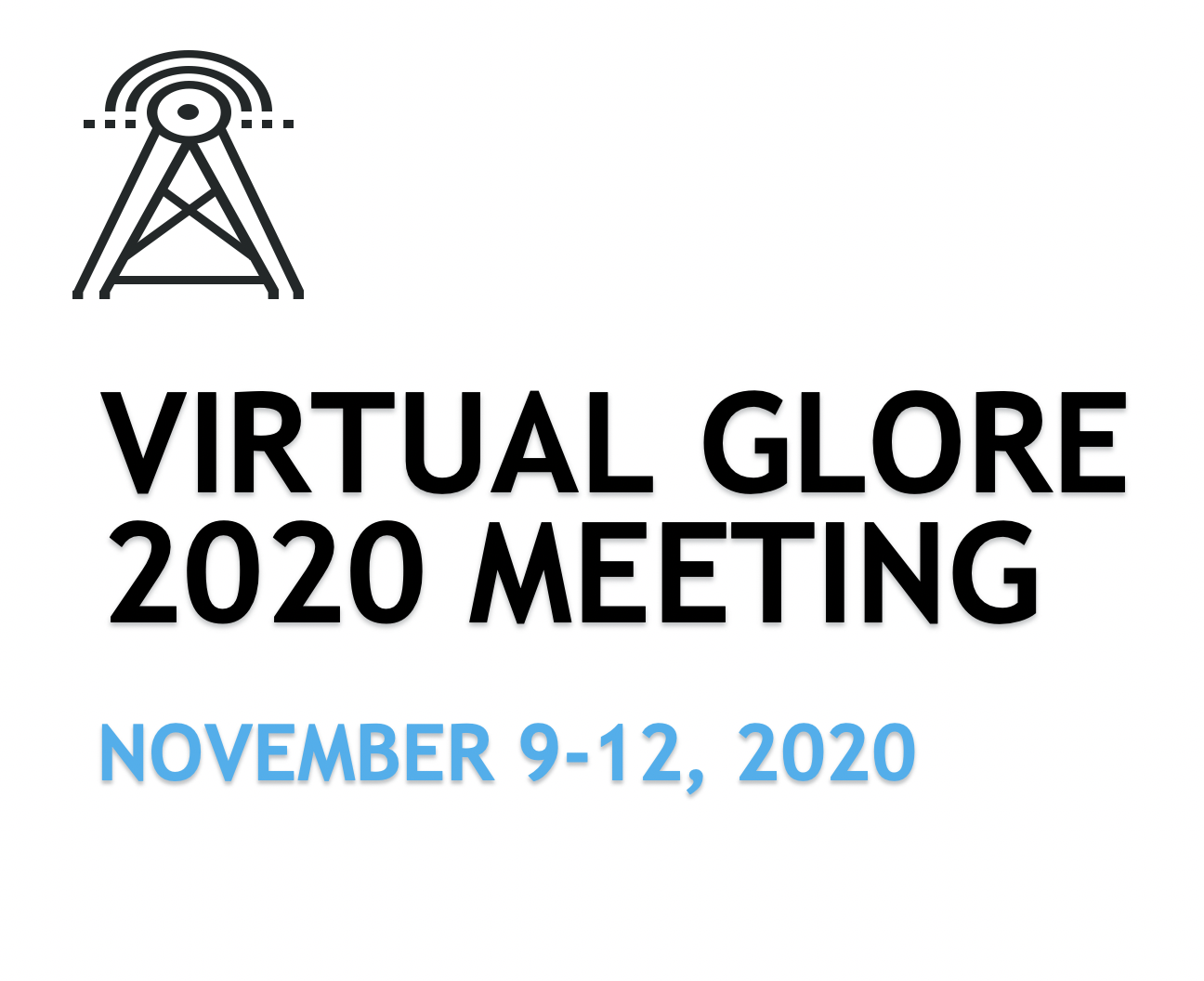 Among the American participants from outside the government were Frank Barnes of the University of Colorado, Boulder; C.K. Chou, formerly with Motorola and now a consultant based in the San Francisco Bay area; and James Lin, the editor of Bioelectromagnetics and a past member of ICNIRP. In an e-mail exchange, Chou said that he was invited as a representative of the IEEE’s International Committee on Electromagnetic Safety (ICES) to provide an update on IEEE standards.

Though some sessions were closed in the past, GLORE meetings have never been so shrouded in secrecy. I covered one of the early GLORE meetings (the 8th, in 2004) and posted this report: “Industry Rules RF”.

Michael Wyde of the U.S. NTP presented an update on his ongoing RF toxicology project. Phase 1 of the project found “clear evidence” that RF radiation can lead to malignant tumors. Phase 2 is on the search for mechanisms to explain the cancer link. The primary focus is on 3G and 4G, but “potentially” also on 5G, Wyde said.

Details of the Phase 2 studies are in Wyde’s PowerPoint presentation, available here.

The briefings on the Japanese-Korean partial repeat of the NTP RF study revealed that the experiment may begin within a couple of months; at least that’s the current expectation. The project has been dubbed “NTP Lite” because it will be limited to male rats exposed to CDMA cell phone radiation. The same experiment will be run in each country. There were two presentations: one by Japan’s Katsumi Imaida of Kagawa University medical school and one by Korea’s Yeon-Soon Ahn of Yonsei University.

They reported that 28-day validation studies have been completed. The Japanese group found that rats exposed to 4 W/Kg consumed less food and put on less weight during the first half of the experiment, but later recovered during the second half. Rectal probes confirmed that body temperatures did not rise by more than 1ºC.

The protocols for the two-year exposure study are nearing completion, in consultation with the project’s seven-member international advisory committee, which includes Wiart and Wyde, as well as Michael Repacholi. The committee held its second meeting —on Zoom— last month.

WHO’s Emilie van Deventer offered the following details on the ten systematic reviews on RF health, commissioned by the WHO last year:

• They will be published in a special issue of the Elsevier journal Environment International. The timing is not known, but no earlier than late 2022.

• There were on average three proposals for each of the topics under review, except for heating, which failed to attract any bids in the first round and received only two in the second. See tally on slide below; the x/y numbers in the applications column are those for which there were two rounds of requests for proposals.

• Human cancer studies was the most competitive review with nine proposals.

• van Deventer has appointed a chair, as yet unnamed, for the “Task Group” which will prepare a revision of the RF Environmental Health Criteria (EHC) monograph. The other panel members have not been selected. 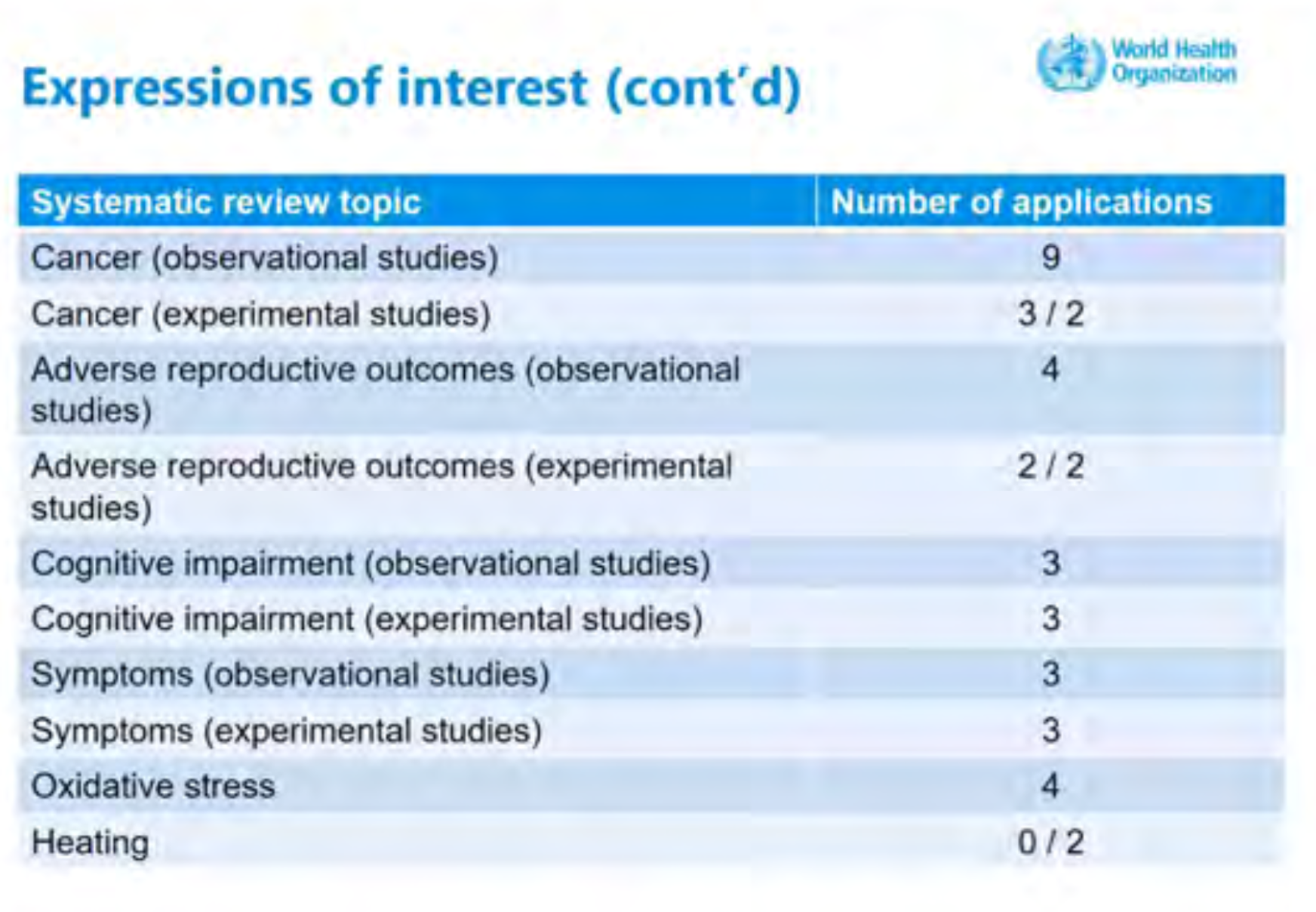 van Deventer’s complete PowerPoint presentation is here. She did not respond to a request for comment. 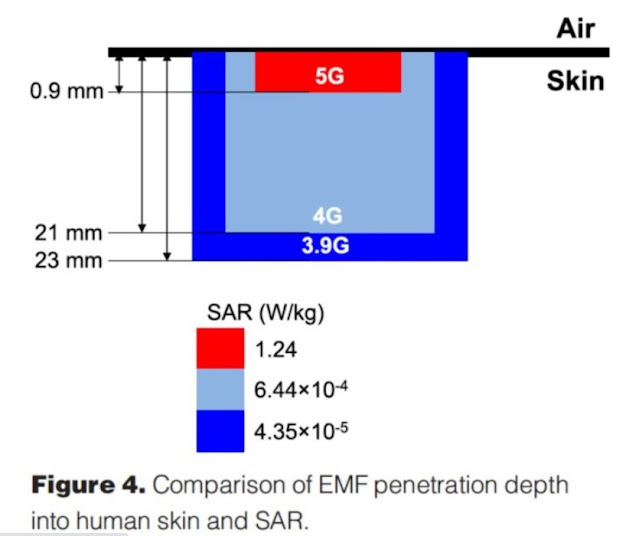 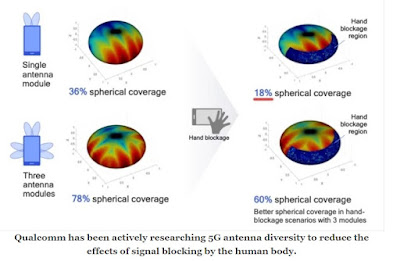