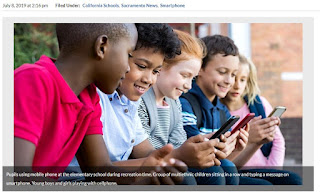 AB 272, Muratsuchi. Pupils: use of smartphones.


Existing law authorizes the governing board of a school district or its designee to regulate the possession or use of any electronic signaling device that operates through the transmission or receipt of radio waves, including, but not limited to, paging and signaling equipment, by pupils of the school district while the pupils are on campus, attending school-sponsored activities, or under the supervision or control of school district employees.
This bill would explicitly authorize the governing body of a school district, a county office of education, or a charter school to adopt a policy to limit or prohibit the use by its pupils of smartphones while the pupils are at a schoolsite or while the pupils are under the supervision and control of an employee or employees of that school district, county office of education, or charter school. The bill would, however, specify circumstances in which a pupil could not be prohibited from possessing or using a smartphone.

Vote: majority   Appropriation: no   Fiscal Committee: no   Local Program: no

THE PEOPLE OF THE STATE OF CALIFORNIA DO ENACT AS FOLLOWS:

The Legislature finds and declares all of the following:
(a) There is growing evidence that unrestricted use of smartphones by pupils at elementary and secondary schools during the schoolday interferes with the educational mission of the schools, lowers pupil performance, particularly among low-achieving pupils, promotes cyberbullying, and contributes to an increase in teenage anxiety, depression, and suicide.
(b) In September 2018, France adopted a nationwide smartphone ban in all primary and middle schools in order to promote pupil achievement and healthy social development.
(c) The London School of Economics and Political Science published a May 2015 study that found that test scores improved significantly at schools that banned mobile phone use, and that the most significant gains in pupil performance were made by the most disadvantaged and underachieving pupils. The study concluded that “schools could significantly reduce the education achievement gap by prohibiting mobile phone use in schools.”
(d) Dr. Jean Twenge, who is a professor of psychology at San Diego State University, published a book in 2017 entitled “iGen,” which presents evidence of an increase in depression and suicide among American teenagers that may be caused by increased mobile device screen time and social media use. According to Dr. Twenge, 8th grade pupils who spend 10 or more hours per week on social media are 56 percent more likely to describe themselves as unhappy than those who devote less time to social media. Moreover, teenagers who spend three hours per day or more on electronic devices are 35 percent more likely to demonstrate risk factors for suicide, such as suicidal ideation, and teenagers who spend five or more hours per day on their devices are 71 percent more likely to demonstrate a risk factor for suicide.