a Taiwan iPad fuorilegge per bambini sotto i 2 anni

Parents who fail to comply with the new "Child and Youth Welfare Protection Act" -- or rather, fail to enforce it upon their children -- may be fined 50,000 Taiwan dollars ($1,576).
Pubblicato da GiorgioCinciripini a 13:34 Nessun commento:

IL GOVERNO VUOLE AUMENTARE I LIMITI PER I CAMPI ELETTROMAGNETICI‏ 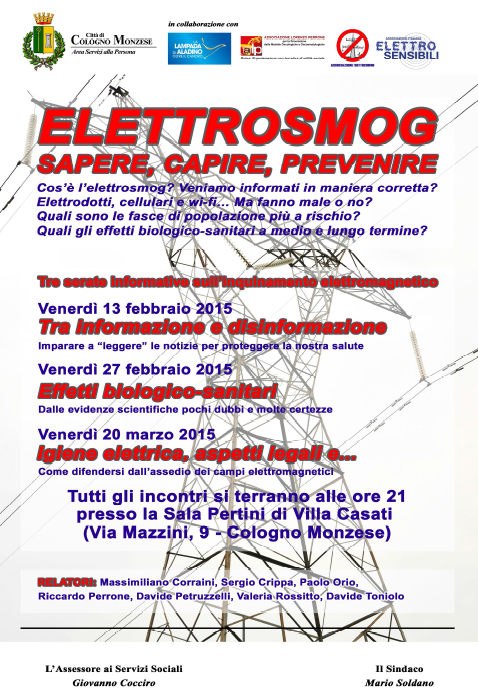 The Seventh Chamber of the Paraná Regional Labor Court
(TRT-PR) determined payment of compensation to a Curitiba
technician who worked for fifteen years in the maintenance of
telephone towers and developed a rare type of bone cancer. The
antennas were not turned off during the execution of the service.

The company Nokia Solutions and Networks in Brazil
Telecommunications Ltd., formerly Siemens SA, will pay $
250,000 in damages plus annuity corresponding to 50% of final
salary. The decision can still be appealed.
The coach was admitted by the company in August 1986 and for
over 15 years conducted testing services, repairs and
installations in the signal transmission towers of the
company. In 2002, a tumor was found in the worker's right
thigh, which was diagnosed with chondrosarcoma, a rare type of
bone cancer. He underwent several surgeries, but ended retired
due to disability, age 37. Three other co-workers developed
the same type of cancer and died aged 28, 39 and 45 years.
The technical filed a lawsuit against the company at the 15th
Curitiba Court claiming that their health problems could have
been caused by direct contact with the electromagnetic waves
radiated by phone towers.
In the opinion of the judge of first instance was not in the
record sufficient evidence to establish a causal link between
the type of work and the disease, since cancer can have
multiple causes, such as diet and medications, among other
factors.
The worker appealed, arguing that the International Agency for
Research on Cancer (IARC), linked to the World Health
Organization classifies exposure to electromagnetic fields as
possibly carcinogenic to humans.
In their analysis, the judges gave the Seventh Class reason
the employee, noting that an expert report presented
information from the medical literature linking
electromagnetic radiation with cellular and genetic phenomena
that promote cancer. They also understood that the company was
wrong to omit as the prevention and monitoring of risks, in
addition to not have done exposure control of radiation worker.
"Considering the fact or evidence together, it considers that
the work activities developed by the author contributed to the
development of their disease (concausa), leaving configured
concausalidade link. Resta set the guilt of the defendant,
given that not arranged for the work to be developed without
risk to the health of your employee "it said judgment which
ordered the company to pay a lifetime monthly pension plus
punitive damages.
Click HERE to access the full judgment.
http://bit.ly/1DuzLUs
Pubblicato da GiorgioCinciripini a 13:33 Nessun commento: