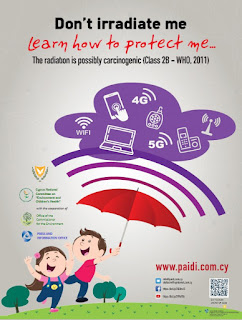 Dr. Michaelifou has helped her country achieve what many of us dream of — science-based awareness of how protect our children from the health impacts of environmental pollutants, including wireless radiation exposure.
The Cyprus National Committee on Environment and Children’s Health worked with medical associations, government agencies, and public advocacy groups and achieved great successes:

Dr. Stella Michaelidou is President of the Cyprus National Committee on Environment and Child Health. She has more than 35 years experience and expertise in environmental chemistry, toxicology and the impact of toxic chemicals on health, in particular children’s health, as well as food safety and risk assessment.

She previously served on the European Food Safety Authority (EFSA) Pesticides Residue Panel, the Scientific Committee on Health and Environmental Risks (SCHER), and the WHO-Euro Environment and Health Committee. She has been an expert for UN Environment Program, the Technical Assistance and Information Exchange Instrument of the European Commission (TAIEX), and the United Nations Institute for Training and Research (UNITAR), among other international bodies,and has been a member of the Advisory Group on Environmental Health of the  International Pediatric Association (IPA) since June 2014.

Dr. Michaelidou is coordinator of the Cyprus Children Environment and Health Action Plans and was the coordinator of United Nations Development Program and European Union research projects. She is the author of many scientific papers and documents, co-author of the “Nicosia Declaration on Electromagnetic Fields/Radiofrequencies 2017″ signed by the chambers of Doctors of Cyprus and Austria/Vienna and the Cyprus National Committee on Environment and Child Health, and is principal author of a document prepared for Cyprus’ Ministers of Health and Education and the Cypriot Parliament on what to do about possible impacts of radiation from Wi-Fi, mobile phones on fetuses and children. She has authored many books, articles, and educational material for parents, teachers, pediatricians, and in 2007 was elected “The Cyprus Woman of the Year for the Environment.”