Today the International Journal of Oncology published a critique of the World Health Organization's pending review of the adverse health effects of wireless (i.e., radio frequency or RF) radiation. The critique was written by Dr. Lennart Hardell, the world's preeminent researcher on brain tumor risk and long-term cell phone use.

His paper provides an historical overview of WHO's EMF Project, WHO's relationship to the International Commission on Non-Ionizing Radiation Protection (ICNIRP), and the relationships of both organizations to the military and electric and telecom industries.

Dr. Hardell notes that the WHO has relied heavily on members of ICNIRP, a non-governmental organization "with serious conflict of interest." In their reviews of the scientific evidence for adverse health effects from wireless radiation exposure, ICNIRP dismisses the evidence for biological effects due to non-thermal exposures. By focusing only on short-term heating effects and ignoring the effects of chronic exposure to non-thermal levels of RF radiation, ICNIRP has been able to adopt RF exposure guidelines about 300,000 times more permissive than otherwise would be required. RF exposure standards in many nations including the U.S. have been heavily influenced by these guidelines.

"The ICNIRP guidelines are of huge importance to the influential telecommunications, military and power industries."

Dr. Hardell calls upon the public, NGOs, and the scientific community "to exert pressure on politicians to change the WHO agenda on RF radiation and health hazards and decide that WHO's purpose is to support world health instead of industry interests."

In May 2011 the International Agency for Research on Cancer (IARC) evaluated cancer risks from radiofrequency (RF) radiation. Human epidemiological studies gave evidence of increased risk for glioma and acoustic neuroma. RF radiation was classified as Group 2B, a possible human carcinogen. Further epidemiological, animal and mechanistic studies have strengthened the association. In spite of this, in most countries little or nothing has been done to reduce exposure and educate people on health hazards from RF radiation. On the contrary ambient levels have increased.

In 2014 the WHO launched a draft of a Monograph on RF fields and health for public comments. It turned out that five of the six members of the Core Group in charge of the draft are affiliated with International Commission on Non-Ionizing Radiation Protection (ICNIRP), an industry loyal NGO, and thus have a serious conflict of interest. Just as by ICNIRP, evaluation of non-thermal biological effects from RF radiation are dismissed as scientific evidence of adverse health effects in the Monograph. This has provoked many comments sent to the WHO. However, at a meeting on March 3, 2017 at the WHO Geneva office it was stated that the WHO has no intention to change the Core Group. 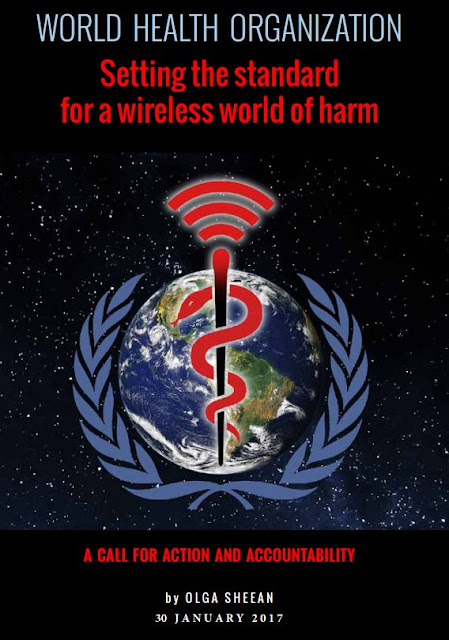 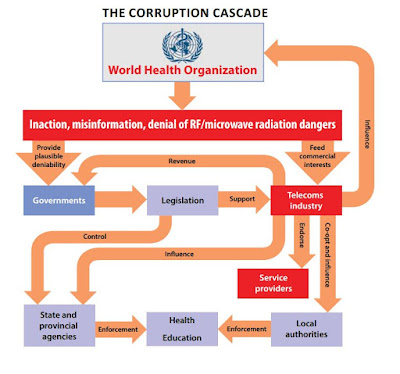 The BioInitiative Working Group has advised the World Health Organization's Dr. Emilie van Deventer that the membership composition of the RF Environmental Health Criteria Core Group is unacceptable.  WHO is urged to make changes to the WHO RF EHC Core Group membership to more fairly reflect membership and expertise of the 2011 IARC RF Working Group.  At present the WHO RF EHC Core Group is indistinguishable from ICNIRP (1, 2) undermining credibility of the process and ensuring doubt about conclusions. Even if schedule delays occur as a result...

New York, NY, May 11, 2015 (Business Wire) -- Today 190 scientists from 39 nations submitted an appeal to the United Nations, UN member states and the World Health Organization (WHO) requesting they adopt more protective exposure guidelines for electromagnetic fields (EMF) and wireless technology in the face of increasing evidence of risk. These exposures are a rapidly growing form of environmental pollution worldwide.

The “International EMF Scientist Appeal” asks the Secretary General and UN affiliated bodies to encourage precautionary measures, to limit EMF exposures, and to educate the public about health risks, particularly to children and pregnant women.

The Appeal highlights WHO’s conflicting positions about EMF risk. WHO’s International Agency for Research on Cancer classified Radiofrequency radiation as a Group 2B “Possible Carcinogen” in 2011, and Extremely Low Frequency fields in 2001.  Nonetheless, WHO continues to ignore its own agency’s recommendations and favors guidelines recommended by the International Commission on Non-Ionizing Radiation Protection (ICNIRP). These guidelines, developed by a self-selected group of industry insiders, have long been criticized as non-protective.

The Appeal calls on the UN to strengthen its advisories on EMF risk for humans and to assess the potential impact on wildlife and other living organisms under the auspices of the UN Environmental Programme, in line with the science demonstrating risk, thereby resolving this inconsistency.

Martin Blank, PhD, of Columbia University, says, “International exposure guidelines for electromagnetic fields must be strengthened to reflect the reality of their impact on our bodies, especially on our DNA. The time to deal with the harmful biological and health effects is long overdue. We must reduce exposure by establishing more protective guidelines.”

Joel Moskowitz, PhD, of University of California, Berkeley, says, “ICNIRP guidelines set exposure standards for high-intensity, short-term, tissue-heating thresholds. These do not protect us from the low-intensity, chronic exposures common today. Scientists signing the Appeal request that the UN and member nations protect the global human population and wildlife from EMF exposures.”

WHO; definiti i tempi per la pubblicazione delle linee guida per le RF

Recently, the WHO EMF Project published a progress report for 2013-2014. A very interesting read…
Among other issues, the report comments on the status of development of the EHC for RF (see page 10 for details).
The timeline for publication of EHC for RF was revised as follows:
Full report available from this link:
http://www.who.int/peh-emf/project/IAC_2014_Progress_Report.pdf
Pubblicato da GiorgioCinciripini a 13:00 Nessun commento:

Her PC Is Cabled, Not Wireless


Gro Harlem Brundtland very rarely uses a cell phone, contrary to the impression promoted by the Norwegian Minister of Health that she is no longer electrosensitive, according to a message from Brundtland herself. Brundtland, a medical doctor, is a former prime minister of Norway and was the director of the WHO from 1998 to 2003.
“In her daily work, Gro Harlem Brundtland uses a PC with a cabled, not wireless, Internet connection. Second, she uses a mobile device —a Blackberry— for e-mail. She avoids speaking on cell phones, but has done so a very small number of times,” according to a statement released by Brundtland's press assistant over the weekend. The message was sent to Thomas Ergo, a reporter for Aftenbladet, a Norwegian newspaper, who broke the story late last week. (See also our report.)
“Brundtland's comments are the first time she has talked to the press about her electrosensitivity in 11 years,” Ergo noted in an e-mail to Microwave News.
Ergo's follow-up article on Brundtland ran in Aftenbladet yesterday under the headline, “I Avoid Talking on Mobile Phones.”
Ergo asked Jonas Gahr Støre, the health minister, whether he had misrepresented Brundtland in an effort to promote government policy that RF radiation is safe and causes no ill effects. Støre denied the charge, adding that his views on RF are based on the scientific advice he had received.
Støre was referring to a report of an expert committee, released last November, which concluded in part: “The large total number of studies provides no evidence that exposure to weak RF fields causes adverse health effects.” The 16 members of the committee include some well-known members of the RF research community including: Norway's Lars Klæboe, Gunnhild Oftedal and Tore Tynes as well as Sweden's Maria Feychting, Yngve Hamnerius and Lena Hillert.
At the time, Ergo asked how the government could assure the public that RF radiation was safe after the IARC decision that it was a possible human carcinogen. The chairman of the panel, Jan Alexander, told Ergo that "a fairly large minority [of the IARC committee] disagreed with the conclusion." As for Interphone study, Alexander said that it is only a single study pointing to a tumor risk. Alexander is the deputy director-general of the Norwegian Institute of Public Health.
In fact, the IARC decision was nearly unanimous and was based on both the Interphone and the Lennart Hardell studies —though many members of the Norwegian expert panel, especially the Swedes, are openly hostile to Hardell and his work.
In May of this year, the Norwegian department of health and human services released its own report whose conclusions were identical to those of its expert committee. The headline on that news story was: “Government: Mobile Radiation Does Not Harm or Bother You.”
For more on the Norwegian expert panel and Brundtland's electrosensitivity, see Ergo's article in Plot, published last year, and our coverage
Pubblicato da GiorgioCinciripini a 13:52 Nessun commento:

There will be the International Stakeholder Seminar on Radiofrequency Policies organized by the WHO and French Agency for Food, Environmental and Occupational Health & Safety (ANSES) Paris 5 June 2013, 9:00am - 5:30pm “Call for examples of good risk management practices”
Sissel chair and board member will be presenting the International EMF Alliance.

The main objectives of the stakeholder seminar are:
- To gather stakeholder suggestions on technical topics to be covered in the monograph that are relevant for the development of risk management practices.
- To exchange information on national risk management practices that have been adopted or are under consideration regarding the usage of RF-based devices and technologies based on a WHO survey undertaken in late 2012.
- To discuss the rationale for and the impact of risk management practices in different countries.
· For this event you can make a presentation (ask WHO emfproject@who.int), but no later than 20 May 2013
· If you have the possibility to come please inform so we can have contact about possible common actions info@iemfa.org.
WHO is unable to meet any costs involved in attending this seminar!
Pubblicato da GiorgioCinciripini a 02:33 Nessun commento:


Here are some statistics on how the public sees the IARC warning that cell phone radiation may cause brain cancer. A break down of 19,000 posts on Twitter and Facebook, between May 30 and June 3, found that 22% expressed skepticism ("This is crazy and whoever believes this is crazy too."); 32% made jokes ("Cell phones cause that kind of cancer that makes you drive like a spaz."); and 46% indicated concern ("I'm getting a landline."). The analysis was by an outfit called Crimson Hexagon and was reported in the weekend edition of the Wall Street Journal.
Pubblicato da GiorgioCinciripini a 09:02 Nessun commento: